Anyone is at risk of being sold into modern slavery, also known as human trafficking, regardless of level of education or social class. This page is focused on warning signs of sex trafficking in particular, although non-sexual forced labour can also occur as part of human trafficking. Being trafficked can occur through no fault of the victim. Awareness of red flags that a trafficker is recruiting, or recognizing signs that someone is a victim in need of help, can prevent tragic outcomes.

An estimated 25 million people across the globe are victims of human trafficking. This issue is so large that the lists on this page do not encompass all concerning signs of sex trafficking. Significantly more information can be found at The Polaris Project.

Signs of Trafficking Recruitment:
– Commenting on social media photos or sending direct messages.
– Feigning romantic interest, love bombing, extreme flattery.
– Asking the target about financial needs and desperation.
– Promising gifts or other financial assistance.
– Offering to pay to buy the target's worn clothes.
– Offering jobs for dancing or modelling.
– Claiming job offers will include lodging and food.
– Assuring the target that they'll take care of them.
– Promising to save the target if currently experiencing domestic violence.
– Requesting that the target prove their identity with selfies.
– In long-distance situations, buying travel tickets for the target.
– In local situations, unwilling to meet in a public place.
– Read more about the grooming process. 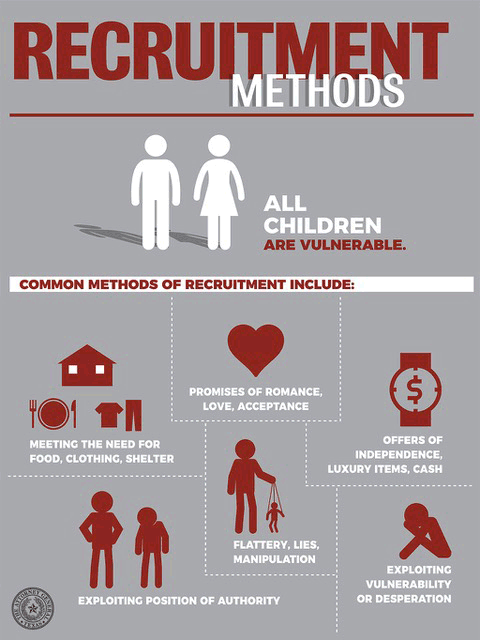 Signs Someone is Being Trafficked:
– Appears withdrawn from family, friends, community organizations, or school.
– Wearing new or expensive things outside what they might usually afford.
– Has had a sudden or dramatic change in behavior.
– Is a juvenile engaged in commercial sex acts.
– Has bruises in various stages of healing.
– Comes across fearful, timid, or submissive.
– Seems disoriented, confused, or shows signs of mental or physical abuse.
– Shows signs of having been denied food, water, sleep, or medical care.
– Is often in the company of someone to whom he or she defers.
– Seems to be controlled in where they go or who they talk to.
– Appears to be coached on what to say.
– Lacks suitable or stable living conditions or personal possessions.
– Does not have freedom of movement, is under enhanced security.
– Call the Canadian Human Trafficking Hotline or the American Human Trafficking Hotline.